It’s very rare that I get to see filming as it happens. I often visit locations years, even decades after they’re used in a film or TV programme. But last month you could barely move in Cardiff for camera crews. A trip first planned back in August to visit friends in the Welsh capital and to go see former Doctor Who writer Russell T Davies do a Q&A for the Royal Television Society , happened to coincide exactly with the filming dates of scenes for a new Mark Wahlberg film – 26th to the 29th October 2019. The film is apparently called ‘Infinite’ and is based on a 2009 novel, ‘The Reincarnationist Papers’ by D. Eric Maikranz.

I travelled down the Saturday afternoon and they were to close off a major road into the city centre at midnight, only to reopen the morning I left. That was uncanny given that I’ve been to Cardiff many times and wanted to see Doctor Who filming every time and failed. The reason I knew about the planned filming was thanks to coverage in the local paper – a major part of the city centre was going to be used and would impact on pretty much everyone who lived or commuted by it. https://www.walesonline.co.uk/whats-on/film-news/mark-wahlberg-cardiff-newport-road-17104506

Now what fascinated me was the amount of planning that the filming for about at 54 hour period would have needed. Road closures (a major road at that), traffic management, barriers, security staff, as well as allowing residents and businesses to function as normal. It must have cost a fortune – something only a film with a Hollywood budget could afford.

The part of Newport Road being closed was between the city centre and my friend’s house so I knew it well. We got the bus passed on the Saturday afternoon and spotted that they’d already begun preparations, so later that evening about 9pm we wandered over before the barricade were raised.

Thanks to a helpful bit of set dressing we realised that a hotel was being turned into a New York City Police Department building and would be the focus of the filming. The Mercure Cardiff Holland House Hotel & Spa is a handsome, modern building which I’ve never really thought was that out of the ordinary. I’ve been to charity event there years ago and my friend used to use its gym. There was a lot of activity going on by the side of the hotel so that they would be ready to start as soon as possible once the road closures were in place.

I’ve always thought having a dog is wonderful excuse to wander past things and be nosy. In the absence of a dog I’ve now found being a runner is another way to pass by places with purpose. So early Sunday morning, about 7am I pulled on my trainers and ran towards the hotel. Road closure signs and people in high Vis jackets were out already. As I got close to the barricade that had been erected I got directed around it, down back alleys and roads. Not much to see except two massive lighting rigs we’d seen parked up the night before. 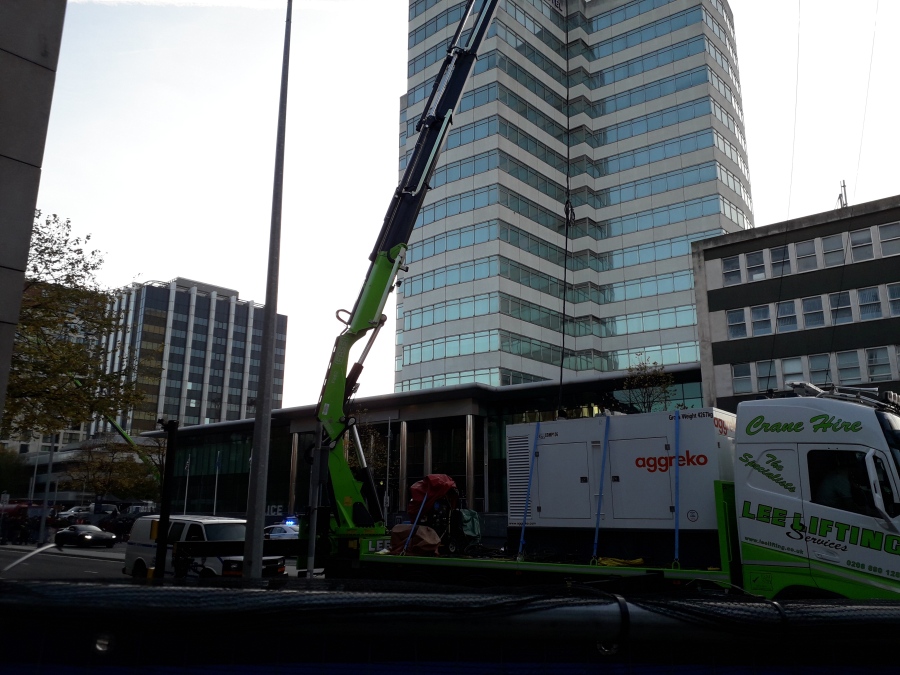 But it paid to go out early as there was a section of the barricade by a main road intersection that allowed tantalising glimpses between fences. Pausing on my jog I managed to snap a few pictures and could see filming taking place – extras standing round, NYC police cars and streetlights. I could also see some crew looking towards me and the gaps. A few hours later when we went into the centre they’d added some sheeting along the barricade to completely shield it. 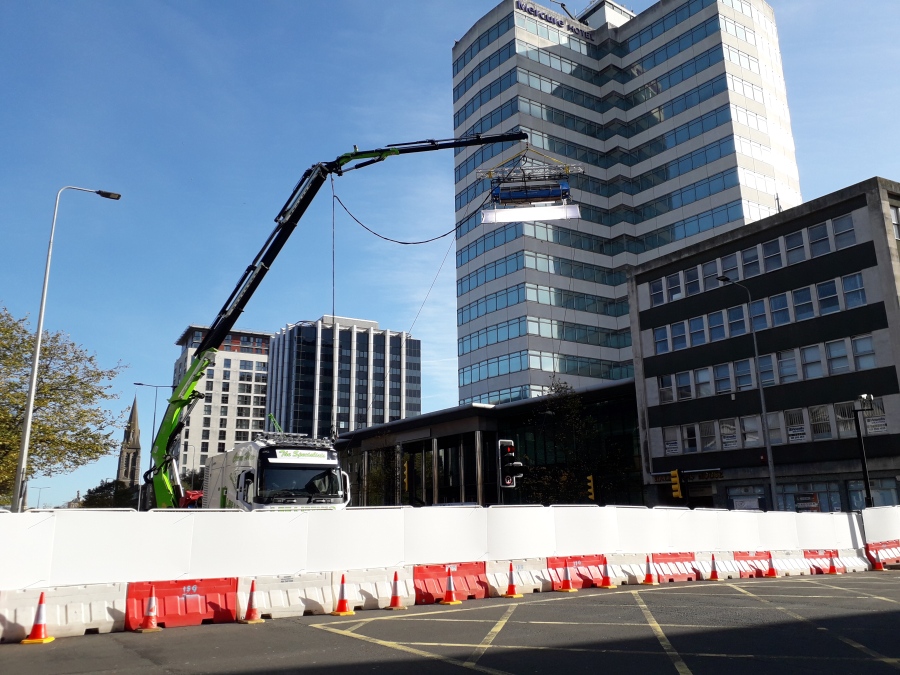 They couldn’t stop people taking pictures from buildings overlooking the filming though, which essentially covered a city block. I think it was incredibly naive of them if they thought they could film in a major city centre and not get folk curious. Photos and videos appeared on social media quite quickly. https://www.walesonline.co.uk/news/wales-news/newport-road-filming-mark-wahlberg-17157103

On the Monday we walked passed again (no alternative if you wanted to avoid getting a detoured bus). They’d opened up a section of the barricade for some reason and it was easy to see inside the compound and witness some kind of action scene being filmed – men were hiding behind a car in what looked like a shootout. My friend and I paused at the corner of a junction to grab a quick picture when the traffic cleared. I ended up in an argument with a policeman who seemed to think two people equalled a crowd…

When I passed by Tuesday morning all roads were clear and other that some vehicles and crew down a side street, and some grey dust on the road there was nothing to show that New York City had been recreated in Cardiff. There were also no reported sightings of Mark Wahlberg.

I found it a fascinating glimpse into what happens on a major Hollywood film shoot. I’m curious why a location scout picked a hotel in Cardiff for the scene. I’m sure tax breaks and politics play a part. I look forward to seeing the final film when it’s released and I’ll be able to bore my friends with my tales of trying to watch the filming. 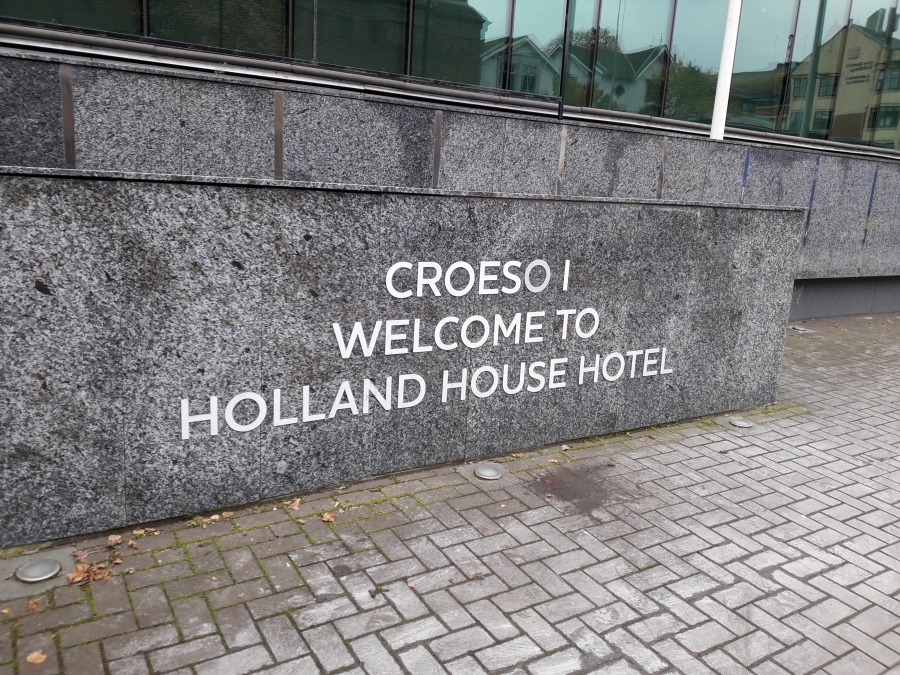 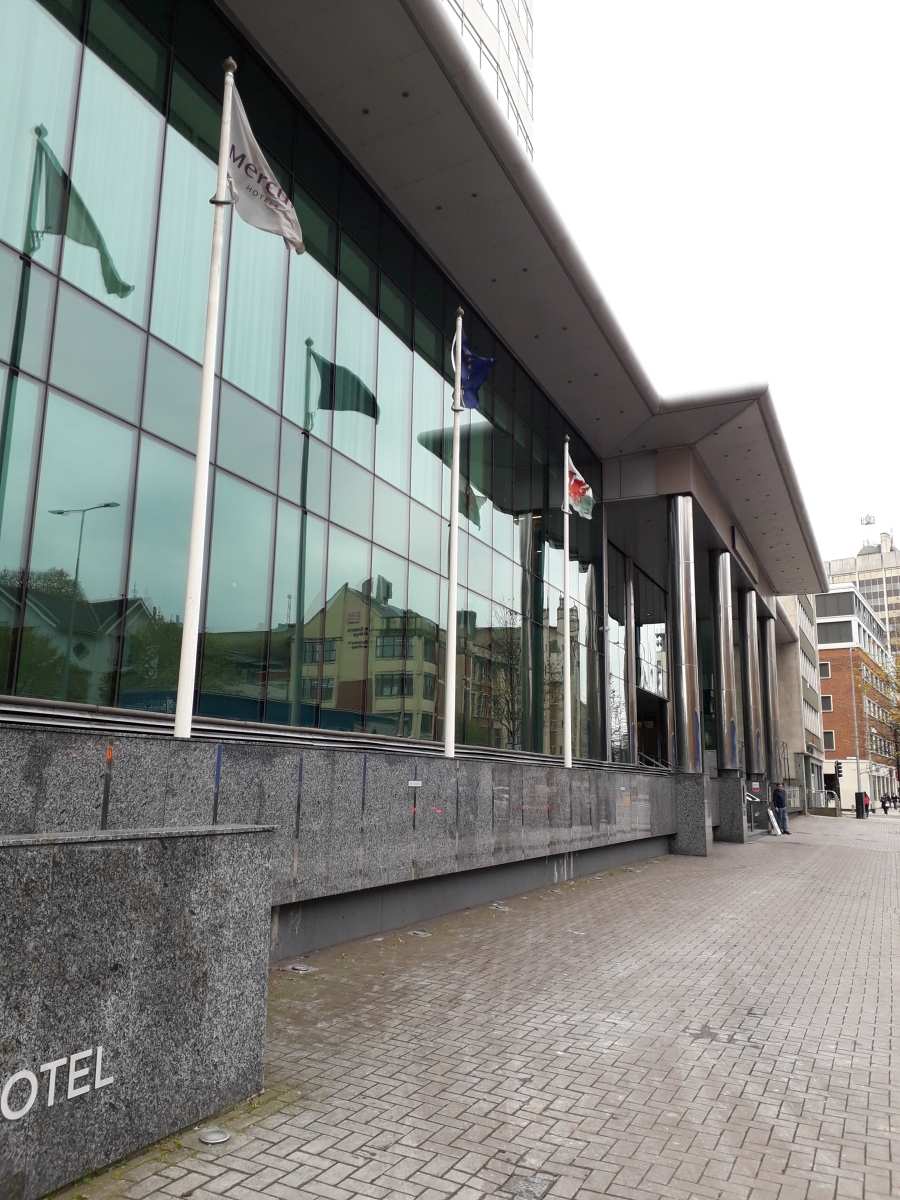 Doctor Who returns next month after being off our screens since Christmas. Not long at all if you’re old enough to remember the ‘hiatus’ from 1989 to 2005. I have vague memories of catching a few moments of the Sylvester McCoy era when I was little, but I really fell in love with the show through finding the Target novelisations when I was at primary school. Later I devoured the Virgin & BBC range of books in the absence of actual programme. As much as I adore the show I’m sort of glad that I discovered the adventures of the Doctor and his companions on paper. I realised later when watching the original series on video or DVD that my imagination far surpassed any BBC budget!

With the new Doctor being a she – it seems to have shaken up fandom a little, and there’s the sense of anticipation for the new season that reminds me of when the show returned 13 years ago. When Jodie Whitaker was announced as the new Doctor I had friends who cried that their show was now ruined and they’d never watch it again! I am curious to see if they do tune in and watch it now they’ve had time to calm down a little. To me the Doctor has always been rather fatherly and asexual, and I’m curious to see how, or even if, anything really changes with a woman in the role. I’m going to watch the new Doctor with a completely open mind – I have no doubt Jodie will be brilliant, but to me it will all come down to the writing – Chibnall, I’m counting on you!

There’s been some photos appearing in the press and on the web of the new series being filmed on location in Sheffield and further afield in South Africa. I would love to see the show actually being filmed one day – I came very close once! I visited Cardiff in October 2016 when they were making the 10th Doctor story ‘The Lazarus Experiment’ and it just happened to be the day (and night) they weren’t actually filming. The location was the rather stunning Senedd building in Cardiff Bay, which is home to the National Assembly for Wales. The very large machine that was central to the story was covered up and looked rather intriguing. I liked that there was a very polite notice stuck to the barrier explaining what was going on.

“BBC Wales is filming an episode of the next series of Dr Who in the Senedd. You will be able to watch the episode next year. Thank you for your cooperation”

I have friends who live and work in Cardiff and have accidently stumbled upon filming on their lunch breaks a couple of times! I used to follow fan sites such as Outpost Gallifrey religiously, following the latest filming spotted and pouring over grainy photographs looking for clues to what the story might be. I’ve not been so zealous in recent years, but I confess to having seen the leaked photo of the new console room which angered the BBC rather a lot…

The first episode of the new season airs on BBC1 on a Sunday rather than Saturday which I think will be great – it won’t be up against the big Saturday shows on ITV, and more people are likely to be at home to watch it. I won’t be able to watch it as it goes out ‘live’ as I will literally be time travelling myself. I’ll be crossing an ocean and time zones as I’ll hopefully be on a flight between New York JFK and Manchester Airport. I’m sure the first thing we’ll do when we get home at a ridiculous time of night will be to put the kettle on and sit down to watch “The woman who fell to Earth”. See you soon Doctor!

This is a text widget, which allows you to add text or HTML to your sidebar. You can use them to display text, links, images, HTML, or a combination of these. Edit them in the Widget section of the Customizer.