Part II On the steps

Getting off the boat at the tiny landing site on Skellig Michael was an experience in itself on the choppy waters. Only one boat can dock at time and once you’re off it leaves immediately and another quickly takes its place to discharge its own cargo of twelve. With a time to be back for our pick up we made our way round the island to the start of the steps were a guide met us to give another safety briefing to us. Despite itching to start the trek up it does pay to listen to the experts, Skellig Michael isn’t a film set it, people have died – the most recent in 2009. They force the point (no pun intended) that this is a ‘wilderness site’ and rightly so, it would be so very easy to get distracted and take a misstep. 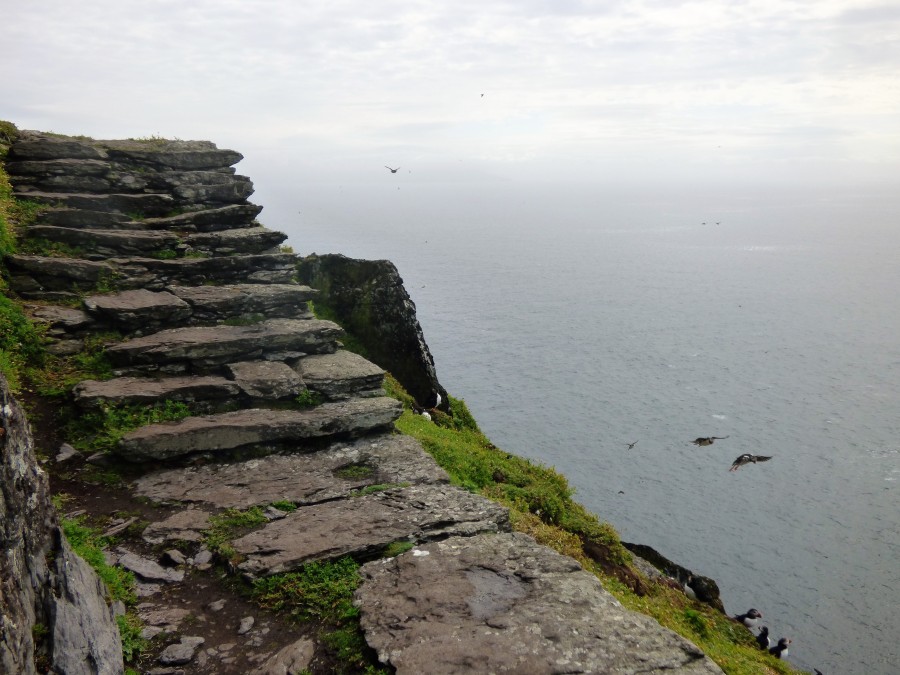 Starting the assent my whole world pretty much reduced down to a one metre wide stretch of stone hand carved and laid in place by monks who first settled on the island in the 6th Century. They’re in remarkable condition as well considering their age, though uneven in places with the occasional overhang designed to catch the unsuspecting boot.  I carefully made my way up Skellig Michael in the footsteps of those monks and a certain young Jedi to be…

I had blinkered myself by shear force of will to ignore the precipitous situation I now found myself in on the quest to bag THE Star Wars location I surprised myself by coping remarkably well with the shear drop beside me. Though I found my nerves started to fray when I had pause and wait to avoid those fellow travellers who had stopped to take pictures of puffins – admittedly lovely creature, but there the island was covered in them. I wasn’t going to risk walking around them! There is absolutely no need to stop and block the way for others who are in a genuine fear for their lives!

We made it to the area known as Christ’s saddle, which is an opportunity to gather our breath before the next steep section of steps up to the monk’s ‘beehives’. The views  are absolutely stunning when you can peel your eyes away from your footing. Spotted a familiar stretch of wall and doorway which Rey wanders through in her search for Luke. We wandered the ancient dry stone buildings as a everyone gathered to have a bit of a lecture about them from one of the Skellig Michael guides. But having been to the Skellig Experience the day before we gave it a miss so as to avoid a bottle neck on the stairs as we attempted to make it back down.

Has TARDIS will travel. View all posts by fromscenetoseen

This is a text widget, which allows you to add text or HTML to your sidebar. You can use them to display text, links, images, HTML, or a combination of these. Edit them in the Widget section of the Customizer.
%d bloggers like this: